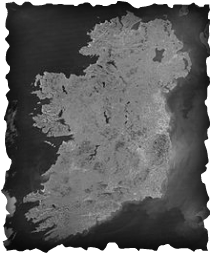 The author of The King of Ireland's Son is Padraic Colum.  The setting is in ancient Ireland, and the time is probably about sometime B.C. because the English have not arrived yet, and the Vikings have not appeared in Ireland yet.

There are a ton of characters, so I am going to only list the ones that are the main point of this book.  There is Connal who is also the huntsman king in the Unique Tale that you hear slowly hear about in the book.  He is the husband of the sister of the seven brothers who were cursed to be geese when she was born whose name is Queen Caintigern.
Then there is the most main character who is "The King of Ireland's Son" as they call him who is the king of Ireland's son.  He is husband to